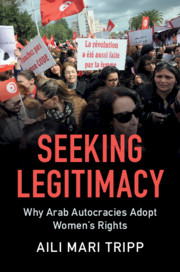 In “Seeking Legitimacy: Why Arab Autocracies Adopt Women’s Rights,” Aili Mari Tripp explains why autocratic leaders in Morocco, Tunisia and Algeria embraced more extensive legal reforms of women’s rights than their Middle Eastern counterparts. The study challenges existing accounts that rely primarily on religiosity to explain the adoption of women’s rights in Muslim-majority countries. Based on extensive fieldwork in Morocco, Algeria and Tunisia and an original database of gender-based reforms in the Middle East and North Africa, this accessible study analyzes how women’s rights are used both instrumentally and symbolically to advance the political goals of authoritarian regimes as leverage in attempts to side-line religious extremists. It shows how Islamist political parties have been forced to dramatically change their positions on women’s rights to ensure political survival. In an original contribution to the study of women’s rights in the Middle East and North Africa, Tripp reveals how women’s rights movements have capitalized on moments of political turmoil to defend and advance their cause.