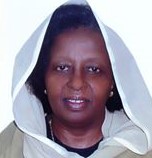 Samia al-Nagar has been a Lecturer in the Gender and Development at Ahfad University for Women since 1996. Prior to that she was a lecturer at the University of Khartoum. Presently she is working on a project “Assisting Regional Universities in Sudan and South Sudan,” funded by the Norwegian Embassy in Khartoum. Between 2011 and 2014 she was lead researcher in a collaborative project with Chr. Michelsen Institute (CMI), Norway and Regional Institute of Gender, Diversity, Peace and Rights (RIGDPR), Ahfad University, on “Gender Justice and Violence against Women.”  The project was funded by the Norwegian Research Council. El Nagar has published extensively on women and conflict in Sudan, gender quotas, women’s rights reform in Sudan, the women’s movement in Sudan. She serves on the Advisory Board of Babiker Badri Scientific Association for Women’s Studies, which focuses on reproductive rights, and is a Sudanese national.