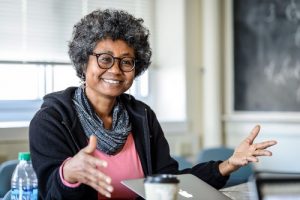 Ayesha Imam is a Nigerian researcher, women’s rights activist and consultant living in Senegal. She has published widely for policy, academic and activist uses, including Framing the Issues and the Development Solutions to Radicalization to Religious Extremist Violence In Africa – A Policy Guide (UNDP 2015), For Sustainable Success: Strengthening Development Approaches to Religious Fundamentalisms and Women’s Rights (AWID 2015), Women In Search of Citizenship: Experiences from West Africa  (2013), Warning Signs of Fundamentalisms (2004), writing for and co-editing Knowing Our Rights: Women, Family, Laws and Customs in the Muslim World (2003, 2006 and in French 2014), and Engendering African Social Sciences (1994, 1996, in French 2004).  She has worked with and for a range of organisations including women’s rights organisations, international NGOs, official aid and UN agencies on women’s rights (including in customary, religious and secular rights regimes), gender-sensitive research and programming, democracy, sustainable development, organisational support and training. She is a member of DAWN’s Executive Committee (Development Alternatives with Women for a New Era). She was the founding Executive Director of BAOBAB for Women’s Human Rights (which initiated and led the anti-stoning sentence campaigns in Nigeria), a founding member of the African Feminist Forum and is active in the international solidarity network Women Living Under Muslim Laws.